Welcome to the blog! In addition to our standard training services, we are happy to provide supplemental support for people who are enthusiastic about trading and committed to learning. A free blog membership enables you to receive exclusive access to market-related information, media presentations, and other forms of educational help.

Non-members may register for blog access by clicking the button below. A registration invitation will also be presented when a “More with Free Membership” link is selected on the blog.

During the early part of my adult life, I counseled individuals and married couples. I saw people with various problems and tried to help them embrace a more healthy and productive existence. In the process, however, I also noted that some people seemed forever stuck in the mud. Their inability to move forward in life was rooted in three particular attitudes—the same ones that keep traders from achieving long-term success.

When stock prices fall temporarily, many people speak of “buying the dips.” This phrase is trader slang for purchasing stocks on sale. Market participants attempt to lower the risk of stock acquisition by choosing moments when stocks are likely to rise after purchase occurs.

A critical component of dip-buying is often overlooked, however. What is it? Dips occur in upward-moving markets. In other words, uptrends are the things that give dips their power. After purchases are made, price movement carries stocks higher into profitability.

So, what do profitable traders do in downward-moving markets? They “sell the rips.” This phrase refers to selling stocks after short-term retracements (price rises) occur. In contrast with dip-buying where general market movement is upward, rip selling takes place in downtrends.

Straight Talk about the Role of Money

In daily life, money is something that we earn, save, and spend. No surprise there. Did you know, however, that the flow of money through the economy significantly impacts the cost of goods and services, interest rates, and market performance? Before your eyes glaze over with the thought that this stuff is for economists only, I invite you to take a few moments and read on. Here, I offer a very simple explanation of how money works, how it impacts us where we live, and how to limit losses in a market downtrend.

Why the Yield Curve Matters

Many people view interest rates as avenues for making or losing money. They think of the amount of money that they will receive from a financial institution for sitting on their cash. Or, they ponder the amount that they will pay to a lender for securing a loan. Seldom do they realize that these same rates are a powerful indicator of future economic conditions that will impact their lives in a much larger way.

Market commentators often convey the message that volatility is a bad thing. At best, it is portrayed as a condition that resembles a common cold—something that is quite annoying, but temporary in duration. At worst, it is a type of flu that can have disastrous consequences if it persists over long periods of time. But are these characterizations really true? How can traders benefit from volatility even when others claim that it is undesirable? 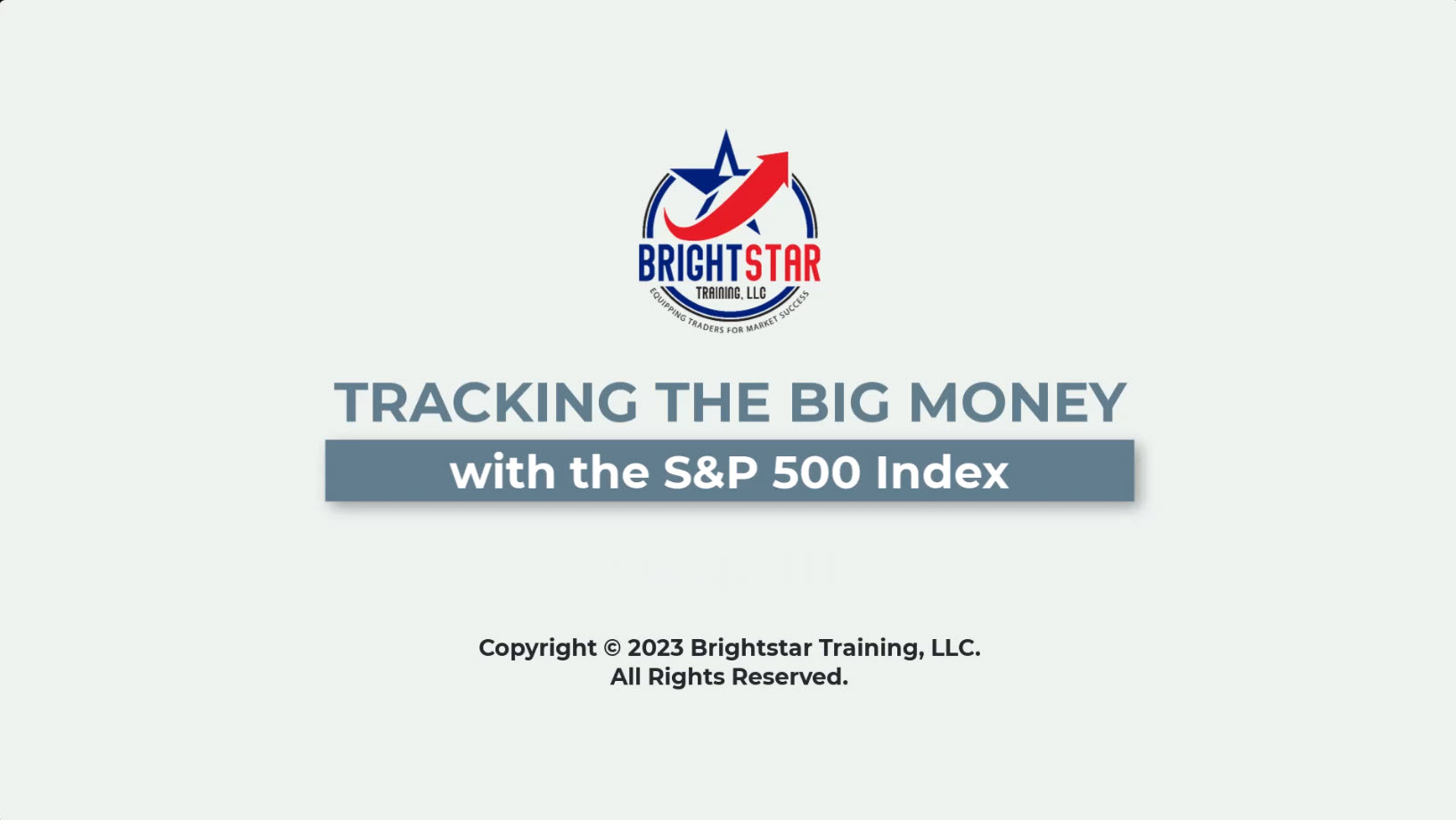 The S&P 500 Index ($SPX) contains 500 of the most prominent publicly-traded companies in the United States. It was formed on March 4, 1957 with S&P 500 Stock Composite Index as the original name. It is widely considered to be an important measure of stock performance in general and most representative of economic direction in the country. For many long-term investors, some portion of their retirement money tracks the $SPX.

How can you determine the direction of the market, the economy, and your retirement money? Learn to read the $SPX chart. To assist you with this effort, we provide a preliminary analysis and forecast in our monthly video series. This is followed up with notes if needed, when market conditions change. At the very least, you will not be surprised by index activity. You may even be able to increase profitability, if you learn to make the right moves.

Why I Day Trade the E-mini Dow

Among those who day trade stock index futures, the E-mini Dow futures market is one of the best kept secrets on Wall Street. Many E-mini participants trade the S&P 500 (ES), Nasdaq-100 (NQ) or Russell 2000 (RTY). For various reasons, these markets are not as easy to trade. Continued…

How Long Does it Take to Learn?

Traders may be classified as professionals or nonprofessionals. The first group is largely comprised of individuals who trade for financial firms, manage other people’s portfolios, and otherwise make their living from trading. Employers often train their own people and impose their own rules on performance. For these reasons and others, I usually prefer to work with nonprofessionals. Continued…

The Definitive Guide for Day Trading. No kidding.

Available only through us

Data providers routinely include “net change” among their price quotations. Net change is based upon the difference between a closing price from the previous day and the current market price. In futures trading, the closing price is not as obvious as one might expect because it can appear in two forms: last price or settlement price.

The last price is the price at which the market traded when it closed on the previous day. It is a straightforward quote and appears on intraday charts. The settlement price is more complicated. This price is the fair market value of the contract traded as determined by a number of factors selected by the exchange. It is displayed as the official price for the end of the day and appears on daily and higher time-frame charts, but not intraday charts.

Because the last price and settlement price are often different from one another, the net change values based upon these prices are also different. As a day trader of E-mini Dow futures, you may notice a difference between the net change provided as a quote and the distance between yesterday’s closing price and the current market price on your intraday charts. When that happens, your data provider is likely using the settlement price in calculating net change rather than the last price.

For several decades, Stock Trader’s Almanac (STA) has endeavored to provide “the necessary tools and data to invest and trade successfully (Hirsch & Mistal, 2023, p. 7).” It was originally created by Yale Hirsch (1923-1921) and reflects his lifelong interest in market history, cycles, and price patterns. His son, Jeffrey, joined Hirsch Holdings, Inc. in 1990 and eventually became editor-in-chief with a desire to improve the content and application of the almanac. Continued…

Since 1981, company founder Howard Arrington and his team have sought to create versatile products through unusual responsiveness to customer input. As a result, Ensign charting software is updated with great frequency (several times each month) and contains a large number of useful features that are difficult to find elsewhere. The price for leasing the software is attractive. Rather than increasing prices every year, Ensign maintains a reasonable and stable price structure while offering a high-quality product.

StockCharts.com offers numerous features designed to assist traders and investors with making sound market decisions. It combines technical tools, education, and commentary in a massive website. Charts and scanners are particularly useful for active traders. They enable easy identification and analysis of trades. The user may develop code for scans and use it to locate trades based upon personal preference. Several free features are available. Many more desirable features are provided for a modest fee.

The New Era of the Booming 1920s and Its Aftermath

by George A. Schade, Jr.

In this day and age, history is often viewed as a collection of facts and figures rather than what it really is — a rearview look at real people who struggled to make sense of their times and offer contributions to the world.

George Schade’s journey through the brief but meaningful life of Richard W. Schabacker (1899-1935) offers readers a rare look at the evolution of financial markets in the early part of the twentieth century. During his employment at Forbes magazine (1925-1935), Schabacker became financial editor and wrote numerous articles that educated subscribers. As Schade points out, Schabacker’s keen insights and obvious writing ability enabled him to spread the word about the importance of technical trading.

A lesser-known fact about Schabacker is that he published a correspondence course in 1932 that covered chart formations and trading tactics. After his death, brother-in-law Robert Edwards collaborated with Albert Kimball to present much of the course in book form. This 1937 text later served as the basis for Part I of Technical Analysis of Stock Trends published by Edwards and McGee in 1948. Today, Edwards and McGee is widely regarded as the early Bible of technical analysis. Historically, though, it is clear that a substantial portion of this Bible came from Schabacker.

Schade’s book is detailed and well-researched. It is a must read for market participants who desire to trace the roots of technical analysis and trading.